FLINT, Mich. — Even before lead began pouring from the spigots in this hollowed-out former General Motors town, residents here had a big water problem: They couldn’t afford it.

In a city where 40 percent of the residents live in poverty, and where utility rates are among the highest in the country, water and sewer bills create an ever-present burden for Flint’s 99,000 residents. People borrow hefty sums to keep their service from being shut off, battle the city over inscrutable charges, and sometimes illegally turn the water back on themselves, fearing that Child Protective Services might remove children from a home without working taps and toilets.

Flint’s fiscal crisis preceded — and laid the groundwork for — the lead-contamination crisis that has exposed most of the city’s 9,000 children to the potent neurotoxin, which is linked with reduced IQ, behavioral problems and kidney damage. But while the threat to children’s health is understandably getting the bulk of the national attention these days, the water system’s larger monetary crunch will continue to haunt the city long after Tuesday’s presidential primary has faded.

“It took this water crisis for politicians like yourself to notice we are a city in trouble,” Flint Journal Editor Bryn Mickle told Democratic presidential candidate Hillary Clinton during Sunday’s presidential debate.

Flint’s problems include crumbling infrastructure and a dwindling tax base, which have led the city to rely increasingly on its water and sewer revenue to keep its coffers afloat. The moves have helped drive water rates in Flint to the highest in the country, averaging $75.84 a month, according to a recent report from the nonprofit group Food & Water Watch. Total utility bills, including sewer service, are about twice that.

For residents, the result is a month-to-month scramble to get by. Some have to weigh whether to pay for water or keep the heat on in winter. Others, like 61-year-old Larry Shears, have had to haul their water by hand from miles away.

“The whole subculture of the marginalized have found ways to survive,” said the Rev. Robert McCathern, whose Joy Tabernacle Church sits at the epicenter of Flint’s blight in the historic Civic Park neighborhood. “And that’s what it is — survival.”

Flint’s high water bills don’t just cover the cost of running the aging, failing and over-sized plumbing system. Thanks to a loophole in state law, Flint has for years been raising water and sewer rates and transferring millions of dollars of that money to the city’s general fund.

Michigan law restricts local leaders’ ability to raise property and income taxes, and the legislature has slashed the money it shares with cities in recent years. That left Flint’s water and sewer revenue as one of the few cash sources available. By 2011, about 10 percent of the water fund was being sent to the city’s general budget: $5.3 million, each year, according to a state review.

The fund transfers — which started under Flint’s elected Democratic mayors and were continued by emergency managers appointed by Republican Gov. Rick Snyder — left the water department’s already diminished coffers drained in April 2014. By then, the city had to decide whether to keep buying treated water from Detroit, whose price was rising, or switch to the Flint River.

Flint, led by Snyder's emergency manager, chose the free river water. But the corrosive water was left without proper treatment and leached lead from the city’s pipes, causing the contamination to spike.

Private attorney Val Washington, a former judge and deputy state treasurer, argues that the city could have kept purchasing Detroit water if the transfers had not depleted the water and sewer funds. 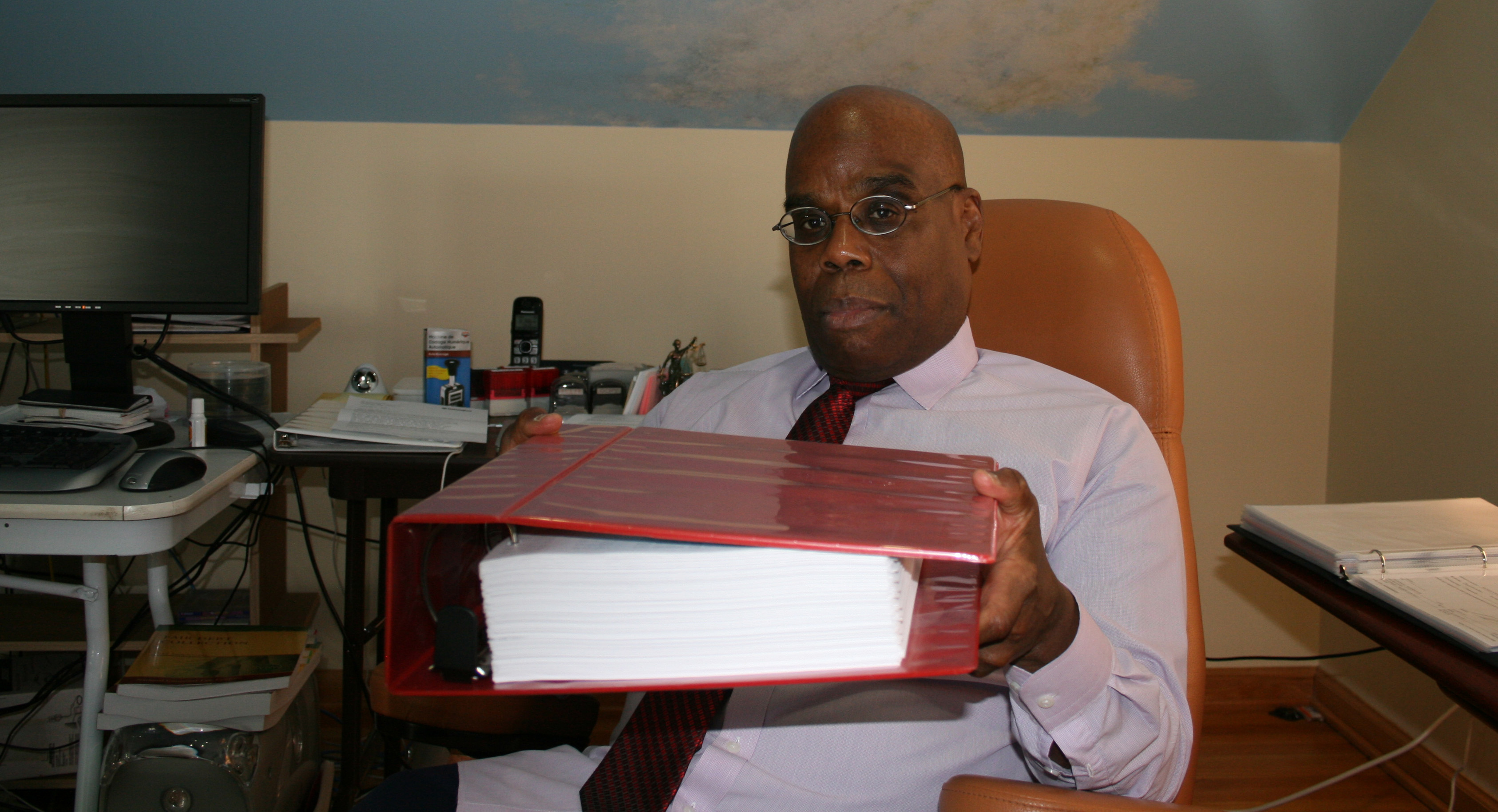 “If you follow the money they had a healthy fund balance in 2006 — $36 million,” said Washington, who has brought a series of class-action lawsuits challenging the water rate increases and fund transfers. He added: “But if you’ve been using the money and bleeding these funds down to zero or negative balances, you have no money. Then you have to look for the cheaper solution.”

Washington’s lead plaintiffs in one suit, Shears and 54-year-old Margaret Fralick, were barely making ends meet when they got a water shut-off notice from the city in February 2014.

Working part-time cleaning grocery store floors at night, they managed to buy the house they had been renting when their landlord went into foreclosure in 2013. But then they discovered they had inherited thousands of dollars' of unpaid gas and electric bills from the previous owner.

“We had to make a choice: Are we going to be cold in the winter or take the risk of being without water?” Shears said. The couple chose to put everything they could from their combined $1,500-a-month income toward paying down the heating bill, and as a result fell behind on the water payments.

With help from the Department of Health and Human Services, they managed to cover a $273 bill just days after receiving the shut-off notice. Still, the city cut off their wateron April 22. Shears says the water department admitted the error but told him he would need to pay a $75 reconnect fee, plus another $144 of his balance, to turn it back on.

Shears and Fralick were out of cash, so they lived without running water for a year,pouring their paychecks into bottled water and asking friends if they could use their showers. When their employer left town, they sold their car to pay bills and walked several miles to and from the grocery store each day, hauling gallons of water by backpack. Fralick has arthritis in her back, and when her pack got too heavy, Shears carried both.

“We stayed clean, but it was the things you had to go through, endure, to stay that way,” said Shears. “We did a lot of walking, a lot of compromising. And the worst thing is going to tell somebody you need to use their shower.”

The first big hike came in August 2011, just two months after the GOP-controlledMichigan Legislature finished work on a budget that cut revenue-sharing for Flint by $3 million.

Under a state law dating to the 1930s, the property and income taxes that municipalities can levy were capped, and in exchange the state shared the proceeds of its sales tax. But lawmakers became stingy with the dollars almost immediately. Revenue-sharing from the state had been on a downward trend for years when the legislature approved Snyder’s first budget request in 2011, slashing funding to cities by one-third.

As the impact became clear to Flint leaders, then-Mayor Dayne Walling signed off on a mid-year water and sewer rate hike of 35 percent that hit customers almost immediately.

At that point, Flint's general fund had already borrowed more than $10 million from the sewer fund, even though the department didn’t have the money to pay for even minimal preventive maintenance on a system that frequently backed up, sending sewage into residents’ basements.

But the fund transfers failed to keep the state from declaring a financial emergency for Flint. When Snyder’s appointed emergency managers took charge of the city, they continued the practice of raising rates while transferring hefty sums out of the water and sewer funds.

Eric Scorsone, who runs Michigan State University’s Extension Center for Local Government Finance and Policy, said other municipalities use some of the same financial mechanisms that Flint has employed to justify the fund transfers — such as having the water department pay the city back for managing its payroll, or giving the city a “return on equity” for earlier infrastructure investments. But the amount Flint was transferring was clearly out of line, he said. Moreover, none those places had water rates as high as Flint’s.

Because of legal loopholes, Washington, the lawyer, has so far been able to challenge only the initial 35-percent rate increase. In August, a Genesee County Circuit Court judge ordered the city to roll back the hike, but residents say they have seen no drop in their bills.

As part of the legal proceedings, Washington asked the city for a list of every lien placed against a property during the four years that the rate increase was in place. The list includes 21,000 addresses, spanning 600 pages. Flint has about 29,000 water accounts.

At one point Washington filed a federal suit, but it was quickly killed. There is no federal right to affordable water, the judge told him.

“I said, 'You’re kidding,'” Washington recounted. “So I did some research and he was right: There is no right to affordable water.”

That’s a fact that the U.S. Conference of Mayors is keenly aware of, thanks to its battles with the federal Environmental Protection Agency over the costs of sewer upgrades that the EPA has mandated following water pollution violations. But experts say that short of providing more federal dollars, few solutions exist for making water more affordable in impoverished communities.

“In the food space we have food stamps, but there’s no such thing as a water stamp for people who can’t afford it,” said Brent Fewell, a former top EPA water official in the George W. Bush administration, whose law firm Earth & Water Group works on water infrastructure financing. “It’s a tough problem, and unless we really completely change the way we price water and manage water, I don’t think it’s going to change anytime soon.”

A pending Senate proposal — being held up by objections from Sen. Mike Lee (R-Utah) — would send at least $100 million in federal loans to help Flint to replace its lead pipes. But even if those loans were forgiven, that would only begin to get the city to where it was before the lead contamination crisis: an over-sized system relying on impoverished ratepayers.

Meanwhile, larger economic trends are stacked against the town. The Genesee County Land Bank, which takes control of properties that have been foreclosed upon for unpaid taxes, owns nearly a quarter of the parcels in Flint and is still acquiring them at a rate of 2,000 properties a year.

The land bank is preparing for a possible dip in foreclosures in the next few years, now that the county treasurer has decided she won’t add delinquent water bills to homeowners’ tax bills for the year and a half that Flint's water has been tainted with lead.

“I don’t think it makes any sense for that to be part of the foreclosure,” Treasurer Deb Cherry said. “It’s not by any fault of theirs. I believe it’s a fraudulent water bill.”

That may be a boon to residents struggling to stay afloat, but it also means the county won’t reimburse the city for those unpaid bills as it usually does. The result: yet another hole in Flint’s budget.

It's the talk of the political world in Michigan, and a former Genesee County Circuit Court judge has played a role in it, albeit a minor one. Valdemar L. Washington, who served on the circuit bench f